Uganda the gullible as it should be called, has been trolled by christian zealots into passing a bill that sentences all homosexuals to be executed. How did this happen you ask? Well over the passed few years, evangelical Christians have been flocking to Uganda like flies to shit. Preaching their anti-homosexual message. The Ugandans, naive and third world minded as they are, have been eating their stories up as if it was the food they wish they had. I have a few problems with this. One, the bill is a direct fuck you to civil rights and liberty. Two where in the bible does it say we must kill gay people? I do remember from my reading of the Canaan Mythologies no such instance. People say, well what about Sodom and Ghamora. So lets delve into that story a little real fast.

Genesis chapter 19 records the two angels, disguised as human men, visiting Sodom and Gomorrah. Lot met the angels in the city square and urged them to stay at his house. The angels agreed. The Bible then informs us, "Before they had gone to bed, all the men from every part of the city of Sodom — both young and old — surrounded the house. They called to Lot, 'Where are the men who came to you tonight? Bring them out to us so that we can have sex with them.'" The angels then proceed to blind all the men of Sodom and Gomorrah and urge Lot and his family to flee from the cities to escape the wrath that God was about to deliver. Lot and his family flee the city, and then "the LORD rained down burning sulfur on Sodom and Gomorrah — from the LORD out of the heavens. Thus he overthrew those cities and the entire plain, including all those living in the cities..."

At this time in history, permissibility wasnt a big deal. The Greeks and Romans had public orgies. Sex for pleasure was just that, sex for pleasure. I dont remember those places being destroyed for it?? These men, obviously thought the new men at Lots house were obviously beautiful, which if they were angels, should have been, and in a time where sexual preference wasnt as cut and dry as straight or gay, their were alot of bi-sexual human beings. The reason sodom and ghamorra was destroyed is because the city was known to be Epicurus. They ate, drank, and were merry. In my opinion they were lustful. What does science have to say tho?

A clay tablet that has baffled scientists for 150 years has been identified as a witness's account of the asteroid suspected of being behind the destruction of Sodom and Gomorrah.

When scientist cracked the cuniform what they saw was an astrological eye witness account of an astroid that fell from the sky and destroyed the area. Using computers to recreate the night sky thousands of years ago, scientists have pinpointed his sighting to shortly before dawn on June 29 in the year 3123 B.C. About half the symbols on the tablet have survived and half of those refer to the asteroid. The other symbols record the positions of clouds and constellations. In the past 150 years scientists have made five unsuccessful attempts to translate the tablet. Mark Hempsell, one of the researchers from Bristol University who cracked the tablet's code, said: "It's a wonderful piece of observation, an absolutely perfect piece of science."
He said the size and route of the asteroid meant that it was likely to have crashed into the Austrian Alps at Köfels. As it traveled close to the ground it would have left a trail of destruction from supersonic shock waves and then slammed into the Earth with a cataclysmic impact.

Dr Hempsall said that at least 20 ancient myths record devastation of the type and on the scale of the asteroid's impact, including the Old Testament tale of the destruction of Sodom and Gomorrah and the ancient Greek myth of how Phaeton, son of Helios, fell into the River Eridanus after losing control of his father's sun chariot.


So let me get this straight, because an asteroid hit the earth in cities known to do whatever they want, it must have been god saying dont have gay sex. This is 2011, why and the hell do people still think this way? How is a story written to control stupid people still have any barring on how to live. Well, because there is still alot of really stupid ass people. Like the Ugandans being herded by stupid ass zealots. In a country devastated and ravished by sickness, its no surprise they would think the sickness that the evangelical Americans preach is equal. Now, people have to be murdered because of Christian values. I wish brainwashed christians would stop speaking for all americans, shits making us look bad. 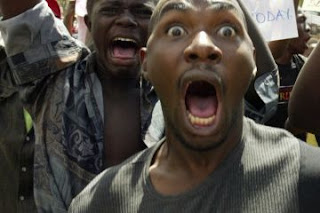 DONATE a BITCOIN
1BzSWA5mN7r2ZDn61VTvHzzUePqGrFEMmg
Posted by Someone at 2:47 PM