i'm going so nuts for coconuts 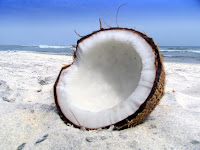 This is day three on my coconut oil journey. Ill tell you what. Coconut oil is from a Higher Plane of Existence. I have been putting coconut oil in my fungal infected ear just once a day for the passed three days. I have also been putting the coconut oil on other things to see what coconut oil will work well with.

My mom is a diabetic, and her big toe is infected from a hang nail. (SIDE FACT: The tallest man whoever lived died from the complications of a hangnail, robert wadlow, who happens to be related to my grandmother =]) So I have also been using her as a coconut oil guinea pig. She has no objections because she doesnt want her toe amputated and the drs are so expensive here in Eastern North Carolina. Besides its in the name of science.

At first i was kind of baffled on how i was going to get the solid oil into my ear. Good thing ingenuity kicked in. I fetched a pale of water, placed said pale into the microwave until the water was nice and hot. That process took roughly 2 minutes. 5 - 4 -3 -2 -1........OPEN MICROWAVE NO BEEP.. Felt like bomb defuser.


Moms Foot Results:
Other Results: (random things i found to put it on since its microbicidal)
Coconut oil for sale on amazon:
Posted by Someone at 2:28 PM